Solomon´s ring was given to him by archangel Michael who told him: “Take this ring king Solomon, son of David, this gift God has given you, to control the world and subjugate the daemons”

The seal of Solomon is one of the oldest and most powerful known charms. 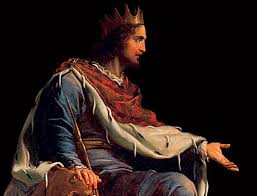 Who was Solomon?
King Solomon reigned in Israel between 970-930 BC in Jerusalem. He was the king who built the first temple of Jerusalem. In the old city of Gibeon, Solomon had a dream in which he asked Yahweh (God) for “a vigilant heart to judge your people, to distinguish between right and wrong, and Yahweh answers. “ I’ll grant you a wise and intelligent mind, like no other before you, nor will appear after.

According to the apocryphal testament of Solomon, the ring was made with the compound figure of two equilateral triangles forming a 6 pointed star better know as the star of David, engraved with the divine name of god (Tetragrammaton) that gave him power and command over all filthy spirits.

Solomon´s ring was given to him by archangel Michael who told him: “Take this ring king Solomon, son of David, the gift God has given you”

Through it, Solomon commanded the world of spirits and subjugated daemons which helped him in the great endeavor of building the first temple of Jerusalem.

Yahweh gave him wisdom and intelligence and all the kings listened to him. He was know as the “wise king”.

King Solomon by his given powers knew the language of birds, animals and fish and thanks to that, nothing on earth was hidden from him by the great power given by the ring.

In the ring is deposited the spirit that Yahweh passed to Solomon in his dream in Gibeon, a “discerning heart to distinguish between right and wrong”.

Carrying it with us gives us the power to discern right from wrong, positive from negative. In the ring there are several symbols engraved, loosely connected just like our lives and feelings.

The spiritual guides are represented by two angels that appear in the ring holding the star of David, they will be ordained to build our life based on good and justice. The ring inspires good judgment to the person wearing it, remembering that king Solomon was a just and wise judge. It helps us establish alliances, with other people or with our wishes, channeling them into a proper way. It is believed that this ring was kept in the Holy of Holies with the Arc of the Covenant after king Solomon death.

The ring reflects the cosmic order, the heavens, the movement of the stars in their own spheres and the perpetual flux between heaven and earth, and the elements air and fire, the seal symbolizes superhuman wisdom. 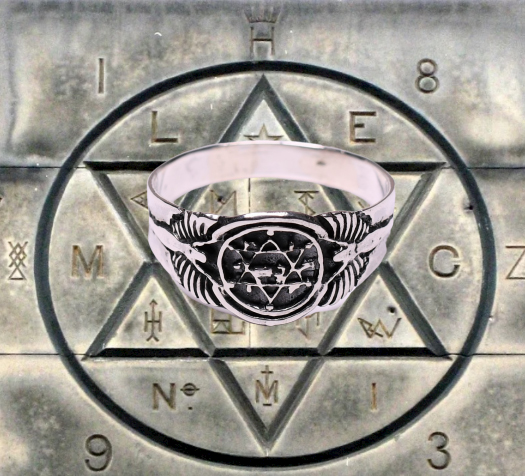 He was a great politician, divided the kingdom in 12 districts, with twelve governors they supplied one month each to king Solomon. He was wise in judgements, like the one where two women each lay claim to being the mother of the same child. Solomon easily resolved the dispute by commanding the child to be cut in half and shared between the two. One woman promptly renounced her claim, proving that she would rather give the child up than see it killed. Solomon declared the woman who showed compassion to be the true mother, entitled to the whole child.

He also made trade treaties with nearby kingdoms and build a temple for Yahweh in thirteen years, when the construction was finished he brought the Arc of the Covenant from the city of David, Zion, into the Holy of Holies in the temple. In the Arc there was nothing more than the two stone tables of the ten commandments, that Moses deposited. Just as king Solomon, we must build a temple for Yahweh, with our behavior, taking care of all aspects of our lives, always leaving a favorite place to rest our thoughts in faith and pray to Yahweh. If Yahweh rules our life, we will have a tidy and fair life. If Yahweh does not rule our life we will fall into disarray and will have no peace.

So SOLOMON’S RING is not only a lovely charm, it is the expression of justice, wisdom and good judgment to be able to build our life with our kin, in a just world in which peace and good reigns. Carry Solomon’s ring and you will find serenity in your life and kindness will flow in your actions, do not forget as in king Solomon’s dreams in Gibeon, it will help you distinguish between good and evil. SOLOMON’S RING: creator of PEACE and GOOD. 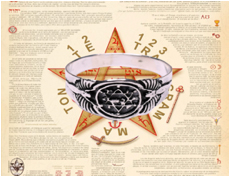